Tomorrow (Saturday February 1) is International Ice Cream for Breakfast Day. You celebrate by eating ice cream on oatmeal, a waffle, French toast -- you name it.

Add toppings such as chopped nuts, chocolate, fruit, whipped cream etc. and enjoy! Even better when friends join you.

Started by a nice Jewish family. Google it for more info and history.
Posted by Jill at 5:29 PM 2 comments:

It's getting better all the time

Yesterday I saw my shrink to talk about what she says isn't depression (hasn't lasted long enough) so I will call it a depressive funk. We talked about everything from the lost and found earrings to my "high expectations of myself."

Dr Dobie recommended increasing the Ativan to 2 mg at bedtime. If that doesn't give  me better sleep, and good sleep is totally necessary to heal from depression, I have a prescription to add another 20 mg of Cymbalta, the anti-depressant I take for help with neuropathy. And if neither one works, I am seeing her in two weeks and we'll discuss further treatment options. She also recommended getting a meditation podcast, which I forgot to do while near the Swedish Cancer Education Center this afternoon.

It's odd but I already feel better. Perhaps that has to do with talking it out to someone who understands. Or maybe because it didn't rain today, and I could wear my new Lucky Brand red suede ankle boots. (Bought on sale for a fraction of the original price!) Or maybe it's because I still have enormous bounce-back and even my downs tend not to last very long.

Either way, I feel better. And aren't these boots cute?! 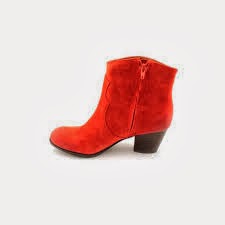 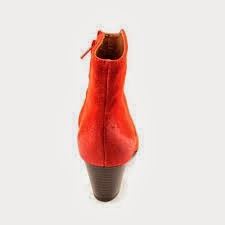 It's been an anxiety-filled few days, so much so that it didn't even register to me as anxiety and stress until I after spent all of Saturday in bed. And I do mean all -- I got up at 4 PM and went back to bed at 7 PM.

I think this started Wednesday night with the search for the missing diamond earrings (thankfully found on Thursday). That search led to a completely sleepless night, despite 2 mg of Ativan, a Vicodin tablet, and half an Ambien. I spent the night on the sofa so I wouldn't wake up Rik with my kicking and turning from side to side, and finally fell asleep at 5 AM for an hour. I got back into bed after Rik went to school and slept a couple more hours.

I thought cooking dinner for friends on Friday night would be a stress-release, but I ended up more pooped than ever and had another completely sleepless night, again despite medications. I wanted to go to synagogue on Saturday morning in support of one of the people I recently coached, but I simply could not get out of bed.

This is so unlike me, except that in the past, my coping strategy for high level stress and anxiety has been to stay in bed for a day. When I do this it usually makes me realize that there is more going on than I can handle. So I made a note to call Dr Dobie, the shrink, and get an appointment. I also remembered that I never made an appointment for my monthly Aredia and Faslodex. Got to call Dr G's office on Monday.

I even told the synagogue president and rabbi that I was unable to complete my duty as chair of a committee. I don't know who will take my place, but I am sure someone will step up. I just don't have the mental capacity or emotional strength right now.

Stressed is not always desserts spelled backwards...
Posted by Jill at 12:17 PM 2 comments:

Last Sunday I began taking round 13 of Xeloda. So far, so good. My left thumb is either healing or peeling from more hand-foot syndrome, so I  have started using the henna again.

This week has been stressful and frustrating. I continually forget basic words, names of things, etc. I am either too busy or have nothing to do at all. Yesterday I cleaned my diamond stud earrings and put them on the counter to dry while I turned to another task. Well, I forgot about the earrings until after I'd gotten into bed and by then it was too late. We looked everywhere but couldn't find them. That's an expensive mistake.

Today at support group someone suggested I look in the kitchen sink catch pipe under the counter. Sure enough, the earrings were there!

But that doesn't excuse my memory lapses etc. I worry that I may have more active brain brain mets, so contacted Dr G to see if he thought I needed a brain scan. More on that when I hear back from his office.

I feel a strong need to step back from obligations until I can get my head under control. And I mean that literally.

Yesterday I had the cataract surgery on my left eye. Dr M corrected it to 20/25 for distance. I still can't read or see up close without "cheater" glasses but having mid-range and distance vision without glasses or contact lenses is amazing!

I first started wearing glasses at a young age. Neither my mother nor I can remember how young, but definitely before third grade, when we left New York for Cincinnati. My whole life I have wanted to see the alarm clock without first reaching for my glasses, and now I can!

The right eye surgery is scheduled for five weeks from now. I need to have another round of Xeloda (that's two weeks), plus three weeks off chemo, making five weeks total. I am supposed to start the Xeloda again on Sunday but will know for certain after I speak to Dr G at this week's appointment.

Meanwhile I have cheaters, I am cleared to drive while wearing the right contact lens, and I love not having to wear glasses again!
Posted by Jill at 5:25 PM 6 comments:

Email ThisBlogThis!Share to TwitterShare to FacebookShare to Pinterest
Labels: cataracts

I've written before that I have several new year markers in my life: January 1, Rosh Hashanah, my birthday, and of course August 20 -- the day I got the news that my cancer came back. Each day has its own special moments.

On January 1 Rik and I share new year's predictions with friends. We predict on movies, politics, sports, and anything else we can think of. (The next year we check to see who was right.)

Rosh Hashanah brings time in synagogue, meals with friends, and casting off our troubles at Alki Beach.

My birthday, November 15, is fun with friends and sometimes family joining the celebration. I am a true Scorpio -- volatile and passionate in too many ways. The years have mellowed me somewhat. I think family especially would agree with that.

August 20 is the one day in the year I send a giant, Bronx cheer/raspberry (tbbbbh!) to my cancer. We have a party every year. Sometimes it's only a few friends. Family have been here. At momentous anniversaries such as the first, the fifth and the tenth, we've invited more people. I try to serve my favorite foods: dark chocolate (vitamin CH! gotta have your daily dose), whipped cream, champagne and potato chips. If you don't get the combo, it's not worth puzzling over. I will say that I've never met a fried potato that I didn't like.

For 2014, I want to revisit a cancer dream I had almost 11 years ago. I dreamt that I was in my house, but a wild party was going on, and I wanted it to be quiet in the house for Rik, who had to wake up at 5:30 AM to teach. I ran from room to room, asking the partygoers to quiet down.

After I awoke, I realized that the house was my body and the noisy partygoers were my cancer. So I decided that the cancer could stay as long as it was quiet. If it acted up, I would bring on the tough stuff. Basically it's been on the quiet side for 11+ years now, and I hope it stays this way for a long time to come.

And those are my thoughts on the new year.
Posted by Jill at 2:07 PM 3 comments: