Both my red and white cell counts are rising enough for me to feel better and go out to be with people. I'm still not sleeping well, which only contributes to my fatigue, but in general things are better.

Dr G plans to reduce my next dose of Alimta, hoping that it won't hit my counts quite as hard. I had a fascinating second opinion with Dr Julie Gralow at Seattle Cancer Care Alliance, and will post about that soon. One of her recommendations was to try bicaludamide again, given my androgen positivity. So I think Dr G will prescribe a lower dose of that as well. And he's agreed to take me off Faslodex, given my years of treatment with it and the scar tissue it has left in my tush. Time for a break.

Here's a pic of Boychik, who follows me everywhere. He's not really asleep, just in "paws" mode while I'm typing. When I stand up, he's awake and following me into the next room. 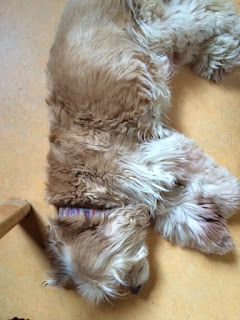 Bob tried to eat my mouth guard again this morning. For a dog with bad teeth, he sure likes to chomp on things! 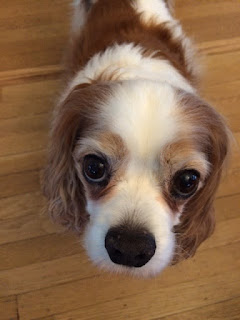 I saw the dentist on February 2 and she pulled that annoyingly loose tooth by my ONJ spot. Thankfully, it no longer hurts but there is a big gap where the tooth was and it might never heal.

On February 5, I was curled up on the sofa (something I hardly ever do). When I got up, my ankles and knees hurt. The next day, they hurt even more. And so on, throughout the next week.

I went to chemo on Monday Feb.8 and reported this pain to the nurse. She spoke with Dr G's office, but with a substitute nurse. I'm not sure the message got through to Jacque, but when I sent her a message on Feb. 11, we spoke the same day. Dr G recommended taking ibuprofen to bring down the inflammation. The next day I went in for a special blood draw to confirm the widespread inflammation. By now the pain had been going on for a week. Dr G approved taking ibuprofen around the clock, more than the bottle says, and it seemed to help. But my other labs showed I was very anemic. That explained why I was so tired! I guess I'll hear on Monday if Dr G wants me to have another blood transfusion.

I did nothing this weekend, but in the wee hours of this morning I googled "what to eat when you're anemic." Many sites all recommend the same things: peanut butter, meat. poultry, eggs, legumes. Some places also list pomegranate juice and other super foods. I ate some peanut butter before going back to bed.

Today Rik went to the grocery store and picked up some goodies for us. We have a freshly roasted chicken for dinner with which I'll make some mashed potatoes. D & P brought over apple cake and stayed for an hour's visit. I had hard-boiled some eggs and ate one on toast for lunch. I hadn't had energy to talk with friends for a week, and it was great to have company.

All in all, this setback meant another week of doing almost nothing except lying in bed. I hope that by Thursday, when I see Dr Julie Gralow at Seattle Cancer Care Alliance for a second opinion on next steps, I'll have energy to get there and have an interesting talk.

And that's the news.