Dr G approved one more round of Xeloda and is giving me an additional week off, because the hand-foot syndrome is still annoyingly painful. Other than continuing fatigue, I am healthy!

Here are photos of Bobka and Boychik (he's the new one, the cocker spaniel). 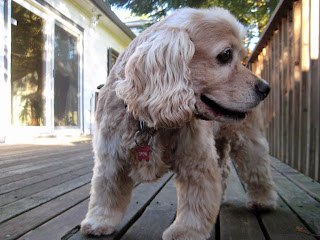 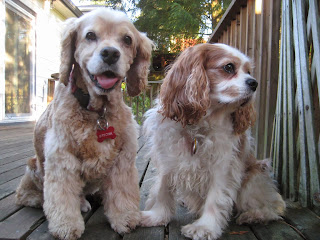 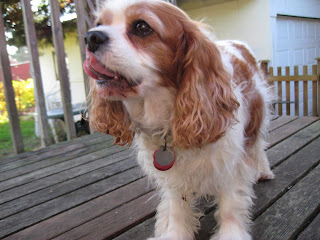 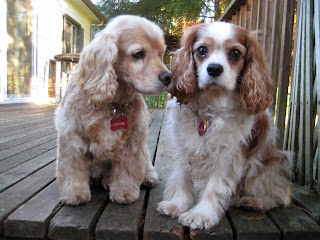 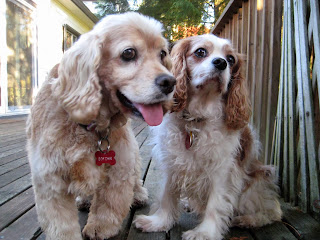 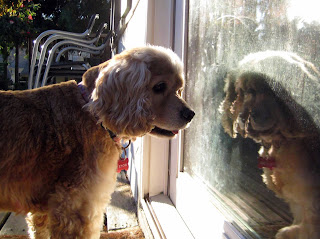 I realize I haven't been blogging lately. The last bit of Xeloda round 9 really got to my hands and feet. For round 10 I reduced the dose again, but my hands have still not completely recovered. The skin on the tips of my finger is peeling and has little sensation or pain, depending on what I'm trying to do. For instance, for about a week I couldn't turn on a lamp because holding the switch to turn it was so painful. Rik had to cook for a couple of days too, when I found it painful to hold a knife. Fatigue played a role too, and I had a couple of days of diarrhea.

Last week we had painters in the house to fix the bedroom ceiling where water had leaked. We had the roof re-done during the summer, but the painter wasn't available until now. So every day I woke up when Rik left the house, about 6:45 AM, which is very tough on me. The painters arrived around 8 AM every day, but didn't always stay the whole day as things were drying. The result, aside from my fatigue, is a beautiful teal blue color on the walls, a warm cream color on the trim, and a lovely lighter teal on the ceiling. I bought drapes in brown with a teal, green and yellow pattern.

We moved the furniture back in (having slept on the sleeper sofa during the week) and friend L came over and reconnected the dealing fixture. All that's left is to rehang the art, a small mirror, and the Japanese haori jacket S gave me. It's purple with teal trim, so it will look beautiful on the teal blue wall.

More later about our new rescue dog!
Posted by Jill at 11:12 AM 3 comments:

End of round ten

I've had ten cycles of Xeloda and am apparently still doing well, although my hands and feet are very bad right now. My hands have that burning sensation and it's hard to use them for anything in small motions, like chopping food with a knife. The webbing between the thumb and forefinger is particularly painful.

My feet are, by turns, either or both numb from neuropathy and painful from hand-foot syndrome. It's hard to walk when I first get out of bed, then it eases up, but after only a couple of hours I can't stand any longer.

I don't mean to only complain in this post, but these side effects are the realities of living with metastatic breast cancer.
Posted by Jill at 5:53 PM 2 comments:

My support group friend D went into the hospital last week and began comfort care over the weekend. He died today at 3:45 pm, just as we in group had finished talking about him.

Cancer, this terrible disease, strikes too many people at too young an age. D was diagnosed less than a year ago. He came to group filled with anger at his diagnosis and unsure how to react to it. Over the few months I knew him, he moved from anger and frustration to acceptance and focused on living his life with cancer. I am sure going to group helped him to learn coping skills. Meeting other people with advanced cancer also played a big part in his acceptance of his situation.

D was a gentleman in every sense. When B and I needed rides every week this  summer, because Rik was working and he needed our car, D came though week after week. We three developed a deeper relationship during our weekly commutes and even on our last ride, we benefited from one another's wisdom.

D leaves behind a wife and teenage children, as well and many other family and friends. Zichrono l'vracha -- May his memory be for a blessing to all who knew him.
Posted by Jill at 7:04 PM 2 comments:

Since we've been back in Seattle I've bought lots of groceries, ran some errands, and taken down my part of the sukkah. We had a sunny afternoon yesterday, and I spent a hour or two taking down the decorations, throwing the s'chach (greenery) off the top of the sukkah, and sweeping the needles and green bits off the deck. (The next day was compost, recycling and garbage day.) I checked all the electric lights before packing them up, and have some of the decorations drying on the table while the rest of the stuff went straight into the storage box.

I made dinner for a shul family needing support, and have two other meals to make on Thursday and Friday. I sure hope no one gets tired of sesame cold noodles!
Posted by Jill at 1:33 PM 2 comments:

Rik and I went to Vancouver BC for the bar mitzvah of the son of close friends. It was also the first time we took the all-electric Leaf on a road trip...

There are several high-speed charging stations on the highway from Seattle to the Canadian border. We headed for the first one north of us, about 65 miles away. We arrived there basically on "fumes," with only two miles remaining on the car's electric charge. It takes about 30 minutes for the car to charge about 80%.

We then drove to the next charging station, about 20 miles away, and charged again to 80% of maximum. Then we waited about 40 minutes to cross the border. We arrived at our hotel with 12 miles left on the charge. Luckily the hotel has an underground garage with electric outlets scattered throughout. We found the perfect parking spot and plugged in our portable 110 volt cord, and by the next morning the battery was fully charged.

This whole experiment took almost six hours, instead of the usual 2 1/2 plus the wait at the border. We were freaked out as well each time the car battery registered too low, wondering if we were going to make it to the next charging station. We have decided that the Leaf is great for driving in town, but that it sucks as a road trip vehicle.

Otherwise we had a great time. The bar mitzvah boy did extremely well with his singing and his Hebrew. His speech, on Cain and Abel, was insightful. As a younger brother, he brought a lot of personal experiences to his talk. The rabbi did something unusual. For each aliyah, he called up first the out of town guests, then the in-town guests, next family members and lastly the parents and the bar mitzvah boy. It was a most unusual way to involve everyone in the room in the service. And it was the boy's grandfather's birthday, so we sang Happy Birthday to him (and he was extremely pleased).

After a bounteous lunch, we headed back to the hotel and I took a long nap while Rik caught up on Canadian news. We joined our friends and their family and other guests for dinner at an Indian restaurant. Upstairs was a private room, decorated in a traditional manner. The food was yummy and spicy, a three piece jazz combo (two guitars and a bass) played mellow music, and everyone talked.

We met my cousins for breakfast on Sunday morning. It's been great to see them more frequently since they live so close to us, and to get to know their children as they grow up.

The drive home was just like the drive to Vancouver, expect that the border wait took an hour. We were again fried from the stress of not having enough electric charge to make it home, and luckily found an open Nissan dealer with a high-speed charger to get us enough juice to get home. What we would have done at night, I don't know. Probably called the Nissan help line and gotten a ride to a charger. But it would have been terrible to run out of charge on the highway. So no more road trips for the Blue Pumpkin.
Posted by Jill at 1:28 PM No comments:

So much to catch up on

Let's see ... Our synagogue honored me on Simchat Torah, we drove the Leaf to Vancouver BC to spend the weekend at a bar mitzvah, I took down most of the sukkah, and we might adopt a second dog. Whew!

Every year Beth Shalom honors two members on the holiday of Simchat Torah, when we finish reading the Torah and start it all over again. All the chairs were moved out of the center of the sanctuary, and people were singing and dancing with the Torah scrolls. When it came time to honor us and read the Torah, everyone formed two lines facing each other, and E and I were carried through the lines sitting on chairs. It was very exciting to be so surrounded by our community.

A congregant spoke about both E and I. In her case, the speaker was a woman who is basically her "adopted" daughter and a great teacher. In my case, it was a friend who's known me for a long time. They both said lovely, truthful and thoughtful things about us.

We each received an aliyah to the Torah. I think I received the last aliyah because of details having to do with my Kohen status, but who knows? It could just as easily been age first (E is a senior). At any rate, I looked over the shoulder of the Torah reader to see the beginning of Genesis in its original Hebrew.

After services we ate a good lunch, and then Rik and I headed north to Vancouver BC. See the next post for details.
Posted by Jill at 1:10 PM No comments: