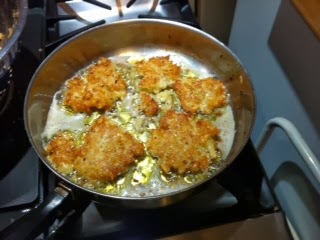 On Wednesday night we ate the first latkes fresh from the oil with N and K and lit the first Chanukah candles. I froze the rest of the latkes for the next day's big meal.

On Thursday I baked triple-chocolate pumpkin tarts adapted from a Martha recipe )....) and watched the Macy's parade. I still want to be a Rockette, even if I'm an inch shorter than I was and can no longer kick my legs that high.

We gathered at D's home at 4:30 or so. Then T and I stepped up to the cooking with D and A, and everyone else scattered to talk. D's turkey was delicious, T's brussels sprouts were fought over as usual, and I was the only one who ate any of my gravy (but it was VERY good!). I think everyone liked the latkes, because they disappeared. 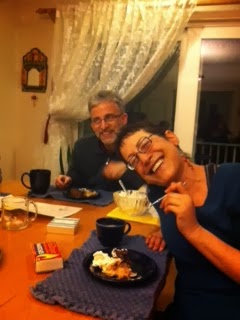 We spent a long time cleaning up and talking. After an hour or two, we all headed over to our home for dessert. (Over the years we've found that breaking up the meal with movie, walk, etc. means everyone has more room for dessert.) A had baked her first apple pie -- it was so yummy! -- and we scarfed down some of the pumpkin tarts with whipped cream for both treats. (Dunava, those tarts are waiting in the freezer for you.) We lit the candles and ate and talked and ate and talked and sent photos far and wide via Facebook. The dogs hoovered the floor for edible bits of pie.

The Thanksgiving part is over but Chanukah continues for another six nights. I need to venture out of our cozy house to buy Chanukah candles.

It was the best of holidays...and I am so thankful that I was able to participate in the baking; cooking in the crowded kitchen elbow to elbow with friends; and talking the night away. 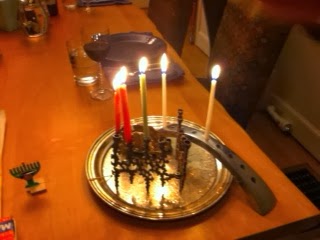 My 86 year old mother visited last week. Between tasks for the synagogue and wanting to spend time with her, I found no spare moments in which to blog.

We took a shopping trip but found nothing; we ate a fantastic birthday dinner (her treat); we went to the grocery store and Costco; we had dinner twice with friends; and we talked a lot. It was such a treat to cuddle in her bed after Rik went to sleep and talk about everything and nothing. PBS had an amazing two part special on John F Kennedy, who my mother and grandmother really adored. That opened the door for talks on what kind of person he was, what kind of government he led, and her father's involvement in the Democratic party. While the henna on my hands and feet dried, we shmoozed in depth.

As to the birthday, I clearly can't do math. I turned 54 last Friday, which is three times 18. And 18 is a special Jewish number. In Hebrew, all letters have a corresponding numerical value. The word that makes up 18 is chai -- life. So I had a really special birthday this year, but it took my sister and my friend S to tell me about the triple chai part.

To celebrate D and C hosted a marvelous dinner with some of my closest friends. Everyone brought delicious food (all my favorites), and C brought at least two slices of six different cakes from Bakery Nouveau (as well as a twice-baked almond croissant or two). It was a very festive evening, complete with "Shabbat Shazam!" from the Superman birthday candle. (Credit again to S, who is so brilliant.)

Mom left before the crack of dawn the next day, and although I got up to say goodbye, I couldn't make it out the door. Rik drove her and managed her through all the hurdles until her escort showed up. What a guy! He sure makes a great husband and sone-in-law. He came home and went back to sleep. At 9 AM I realized I should get up and go to synagogue for the aliyah I'd requested for my birthday, but I couldn't keep my eyes open. Instead I slept until 2:30 PM and made up for a week of missed naps.

I've finished round 11 of Xeloda and see Dr G tomorrow. More to report then.

Haven't blogged in a long time

I am a bad girl. It's just that when I feel well, I don't have so much to say about cancer. It's when I feel bad that I turn to vent on my blog. so it's safe to say I've felt well enough these past two weeks that I stayed away from blogging.

New dog Boychik had to be "vetted" by our vet (this was the day after my last blog post). He was generally healthy, although older than we were told (five instead of three) and had an ear infection, which is so common in cocker spaniels. It's those adorable floppy ears!

The next day was Dunava's concert. It wasn't as well attended as we'd hoped. We want  to raise money to travel to Bulgaria next summer. Most people were already  our followers. Now we have to build an audience that doesn't know us.

I spent the next days recovering from the concert and doing little projects around the house in preparation for the painting of our bedroom. Over the summer Rik noticed water damage over our bed, which we had repaired -- at the price of a new roof! Pete the painter fixed the water damage, cover the entire ceiling with dry wall, and painted our bedroom. The walls are a beautiful teal blue; the ceiling is a lighter shade, and the trim is cream colored. We left the picture rail cream colored as well, so that it would showcase the ceiling color, which extends down to the picture rail. We are very happy with our "aquarium," as Pete calls it.

I saw another ophthalmologist who specializes on cataract surgery. Turns out I developed cataracts from chemotherapy and they have been interfering with my eyesight for several years. My optometrist had told me this story: "When we treat an elderly patient with cataract surgery and s/he dies a few months later, we don't say, oh too bad, he died just after being able to see well. Instead we say, thank goodness his vision was so great during the last few months of his life!" So I will talk with Dr G about cataract surgery next time I see him.