I was interviewed for the recent cure magazine feature on living with metastatic breast cancer.

In the late 1970s, treatment of hormone receptor-positive breast cancer was revolutionized by the introduction of the drug tamoxifen. Since then, a multitude of successful new hormone-based (endocrine) drugs have followed. But despite this formidable arsenal, not all patients respond to these drugs, and many who do respond eventually relapse.

This was the case for 53-year-old Seattle resident Jill Cohen. In 2002, doctors discovered that her breast cancer—initially diagnosed as early-stage disease in 1998—had returned and spread to her bones. Cohen is alive thanks to a series of hormone therapy drugs.

“I feel extraordinarily lucky,” Cohen says. “I have long outlived the statistical odds.”


To read the rest of the article, or to request a copy, click here. CURE Magazine is widely available in oncologists' offices and treatment centers. 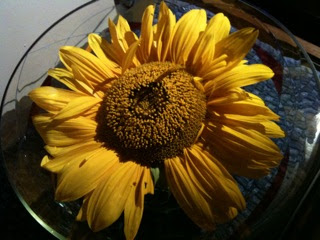 Yom Kippur, the great Jewish day of repentance, begins in just a few hours. I wish those who are fasting an easy fast. And may you be sealed in the Book of Life.
Posted by Jill at 4:14 PM No comments: 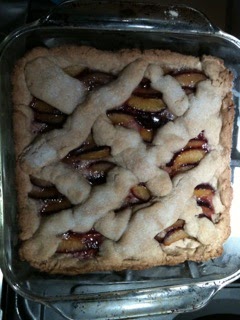 Barely two days after we finished celebrating the new year, fall has hit Seattle. It's cool and grey today, even a little rain is spritzing. I'm dealing with my end of summer blues by baking a zwetchsgen kuchen (plum cake). Basically a shortbread cookie dough with sliced plums, it tastes seasonally of the moment. Thanks to H for sending her husband R's mother's recipe, which halved beautifully.

Now what will I do with the rest of the plums?

Our holiday was not as lively this year. Rik didn't feel well, and so I went to synagogue and on to lunch with friends. I had two specific goals for services this year: I wanted to hear the shofar blown, and I wanted to be able to make the full prostration before God, which is only performed on Rosh Hashanah. It is perhaps the only time during the year that Jews surrender themselves physically, acknowledging God's sovereignty. As I continue this dance with metastatic cancer, I've learned over the years that I have no control over how it rules my life. I had to learn to surrender, at least sometimes.

In Genesis 18:20-21, Abraham argues with God for the salvation of Sodom and Gomorrah, insisting that even one good person would make it worthwhile. But in Genesis 22:2, Abraham submits to God's request to take his son Isaac up to the mountain. Read this short drash for an interpretation of why sometimes Jews argue and sometimes we surrender.

On to the next holiday: g'mar chatima tova, may we be sealed in the Book of Life.

A sweet new year to all

Tonight begins Rosh Hashanah, the Jewish new year. We will spend the holiday with good friends, praying, eating and shmoozing.

Today I baked the annual Sephardic cookies called travados. They are a soft pastry filled with chopped nuts, sugar and egg, formed into a half-moon shape, baked and then boiled for a few minutes in a honey-sugar-lemon syrup and sprinkled with sesame seeds. I also baked two challot using Smitten Kitchen's techniques: one filled with pears (she uses apples) and the other with a chopped fruit filling. Plus I will bring some of the chopped liver to share with our friends.

Celebrating another new year is kind of like celebrating a birthday or my metsiversary for me. It's yet another milestone to mark that I am still here, living well with advanced cancer. Indeed, I am still dancing with cancer.

To help ring in a joyous new year, take a look at this photo from Israel in Switzerland: 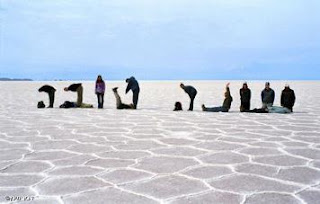 For those who don't read Hebrew, the participants are standing, bending, etc. to spell happy new year in Hebrew.

And so, I wish all a sweet, happy and healthy new year, filled with all the good things in life.

Shana tova!
Posted by Jill at 5:08 PM No comments:

I baked a particularly fancy challah today as part of getting ready for Rosh Hashanah, the Jewish new year, which begins on Sunday evening.

I used my friend J's recipe and a cardamom-cinnamon-sugar filling, but followed the technique for Smitten Kitchen's braided crown challah. 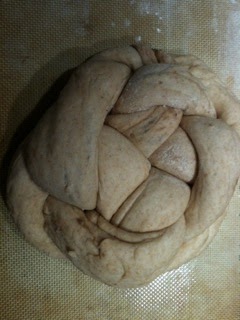 Here is how it looked before going in to the oven: 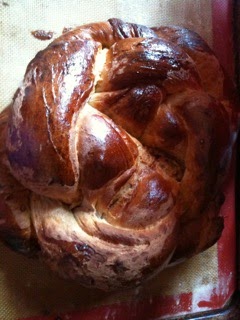 Smells yummy and looks great, if I say so myself.


(With Rapid-Rise yeast, I can start this dough as late as 2 ½ - 3 hours before dinnertime.)

Proof the yeast in warm water and a drop of honey until bubbles form.

Preheat oven to 100 degrees and turn oven off when it hits this temperature.

Mix one cup of flour, wheat gluten flour, sugar or honey, oil, salt and eggs. Add more flour one cup at a time and knead until dough is no longer sticky. (This may take more or less flour than listed.)

Oil a large bowl, place dough in it, cover with a clean towel and let rise for 1 hour in warmed oven. Dough should double in size.

Divide dough in half. Divide each half into thirds. Form one third into a rope about 10 inches long and roll into a flat rectangle. Spray with water and sprinkle with cinnamon and sugar mixture if using. Roll along long edge to make a rope with filling in the center. Repeat with additional two thirds. Braid three ropes together, pinch ends and tuck under to make a loaf. Repeat with remaining half of dough to make a second loaf. Place both loaves on a lined baking sheet and brush each loaf with beaten egg yolk. (If not using cinnamon-sugar mix, you may sprinkle the top each loaf with sesame or poppy seeds at this point.)

Bake for 15 minutes at 400 degrees. Reduce oven heat to 350 degrees and bake for additional 20 minutes or until loaves sound hollow when tapped. Cool on a baking rack and serve warm.

Shabbat shalom!
Posted by Jill at 4:38 PM No comments:

A crack in the pink wall?

It's a little early for Pinktober, but check out this article from the Metastatic Breast Cancer Network blog.

My energy levels have been up and down for the last week. I have alternated 5 mg and 10 mg doses of Afinitor every night and even this seems to be a bit too much. I plan to report to Dr G's office tomorrow.

This leaves me with about 3-4 good hours each day in which I run an errand, write this blog, etc. Then I collapse on the sofa, not to sleep but simply because I can't move any more. So far this week I have been able to accomplish shopping for groceries, going to Home Depot to replace a water filter (no luck there, so a wasted trip), shopping with a friend, and lunch with another friend. Tonight I will attend my choir rehearsal and tomorrow I will try to attend my support group and a synagogue meeting.
Posted by Jill at 5:55 PM 1 comment:

The latest from Dr G

I saw Dr G yesterday and the latest news indicates stability. My tumor marker went up a few points, but is basically stable since I've been on the Afinitor.

Dr G agreed that my crushing fatigue of a week ago might have been due to the mouth infection as well as the Afinitor. He has me alternating 5 mg and 10 mg doses of Afinitor to see if I can move back to the higher dose with no ill effects.

He's ordered a chest, abdomen and pelvis CT and a brain MRI in three weeks and then we will know more about how well this combo works

I asked Dr G about some statistics related to his practice. He treats about 20 patients for metastatic breast cancer. Of those, about half have lived with mets around ten years (could be seven, eight, nine years -- I didn't press him for details). When I asked him if anyone had lived longer than ten years, he looked me in the eye and said, "You."

I'm at ten years and 18 days! And I'm looking forward to dancing with this cancer for much longer.
Posted by Jill at 5:46 PM 5 comments:

I felt so much better on Friday thank on Thursday that Dr G gave me permission to attend a folk dance camp for the weekend. balkanalia! takes place at a lovely Greek community camp in Oregon.

Although there is a lot of music, singing and dancing, I mostly sat in the sun. I did attend one dance and one singing class. There were parties with live music every evening. I pooped out early on Friday night and was in bed before 11 PM, but managed to stay up a little later on Saturday and Sunday nights.

I measured my strength carefully and did slow dances with little old lady steps, but it was a great joy to dance a little bit every day of the weekend!
Posted by Jill at 6:02 PM No comments: