A month since last Abraxane

I had my last dose of Abraxane on June 1 and the pneumonia came on some time after that. Let's say it's been three weeks since I started the antibiotics and while I am no longer sneezing and coughing, I'm still easily fatigued. It's easy to sleep for 18 hours and then take a nap as well.

The only remaining chemo issues relate to my nails. I have begun to lose three fingernails, which is new to me. There are new nails growing under the dying ones, but it's hard not to pick at the top layer although I know I shouldn't.

My former port site is still undergoing wound treatment weekly. They tell me it's no worse than last time, which I take to mean that it's healing very slowly. There may be nerve damage as well, which would explain the zinging pain that hits me out of the blue.

I wish I had more energy to put into the garden, but even pick ing some raspberries and our small crop of cherries was demanding.

I hate to complain, but this has been a very long month and I'm actually looking forward to whatever comes next.
Posted by Jill at 3:25 PM 5 comments:

I felt so well today that I actually got out of bed at a reasonable 10 AM, showered, ate and dressed, and sat on the deck reading. I didn't take a nap, although I thought about it. I even went on a walk around the corner with Rik and the dogs. That 's the biggest sign of improvement from pneumonia.

On the cancer front, I am losing two fingernails for the first time in almost 16 years of cancer. There are healthy nails growing underneath, so I am not too worried. I get my strong nails from my mother. (Dad gave me the thin hair and the long legs.)

No more news for now.

Maybe you remember Komen invited me to a breast cancer blogger summit in February. I went to DC in March while experiencing the throes of Taxtotere side effects. Since then I've had one round of Abraxane, which should have been fine but wasn't. I've also had pneumonia for several weeks. So I'm finally getting around to blogging about my Komen experience.

I am changing my mind about Komen.

The summit began with introductions. There were eight or nine bloggers, not all of whom have actually had breast cancer but all have had some contact with it. Two of us with mets, one with triple negative disease, at least one in early stage treatment and one whose mother and father had both had breast cancer. Half white women, half African-American women. Komen marketing staff and several presenters.

1) those living with metastatic disease

2) those in underserved populations such as poor, people of color, triple neg, etc.

Those are three powerful statements for Komen, especially numbers 1 and 3. 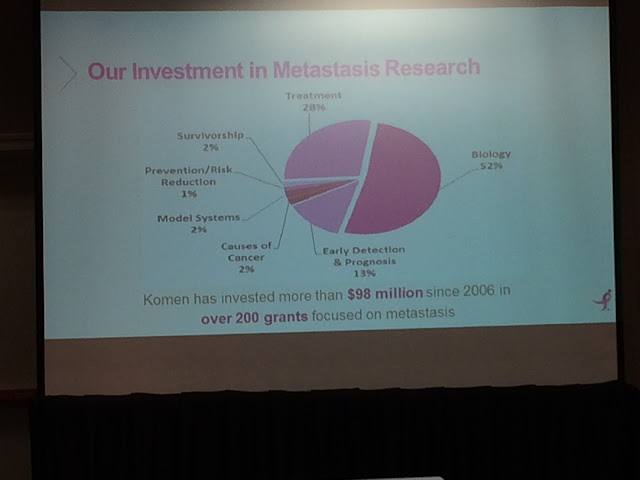 Sadly, no one really knows what number one means. A researcher who presented said that he didn't believe people with mets would benefit from more research into stage IV disease than from research into all kinds of breast cancer. This from a man who treats patients with mets! When pressed, he said that wasn't what he meant. But I heard him say it and I wish I'd recorded him. Komen has work to do in this area. We with mets just want to live our lives, and that means research into our disease. We must press this point. Loudly.

The example of a project in Chicago serving poor women showed a photo of an open sewer in a clinic where mammograms take place. Youd have thought it was a third world country, not the USA. So goal 2 is well in hand.

Yes, we met Nancy Brinker, now head of Komen global. Had dinner with the new CEO Dr. Judith Salerno. And we participated in the DC Race for the Cure.

Now to the last and least expected point. After the Race we were debriefing. Someone said she wasn't a blogger, hadn't been invited to the whole summit (but was sitting with us now, so someone invited her to join us in this most private part of our talks). She said something like, why are you so concerned about mets? What about poor women, women of color and their needs? To which I answered in some astonishment, I didn't set the agenda, Komen did. And I think it's great for Komen to give women with mets a place at the table. And I don't play mine is bigger than yours.

That was my Komen experience. I don't know who this woman was, and I don't want to name the researcher who seemed to think it was okay to develop new drugs to treat his patients but not me and thousands like me.

But the head of marketing took me out to dinner when in Seattle, and invited Dr G to join us, and included her new staff, the ED of Puget Sound Komen and another mets blogger flown here to appear in a PSA. R listened carefully, took notes, and I think we metsters do now have a place at the very large Komen table if we can sit there with open minds and without grudges. That's the biggest change I've seen in breast cancer in my 16 years from early stage to today.

Yes it is pneumonia

Nothing more to add except that the antibiotics seem to be working. I've stopped coughing and blowing my nose. I just have very little energy. If I do one medical appointment it takes me a day to recover.
Other than that life is peachy, if you like sitting around in your pajamas all day long recovering from the previous day's strenous three hour activity (including showering, eating and being a passenger In a car).
Snarky, but just a little.
Posted by Jill at 12:40 PM 1 comment:

No it's not pneumonia

But the closest thing possible. I've just well enough to stay home and not be admitted to the hospital, where of course I could pick up all sorts of bugs no matter how clean everything they keep it.

So I continue to honk, cough, and blow incredible amounts of snot out of my nose. I'm on the second antibiotic, this one especially for pneumonia, and I do feel some better already.

Thank God for A, H, and R, who have been walking the dogs while Rik was away. I am taking two of  them out for lunch now and the third has a tbd date. And thanks to all those who gave me rides, brought food, and came to visit during these past few weeks of chemo recovery and what turned out to be not quite pneumonia. You know who you are and I bow at your feet. And will always, as science fiction author Robert A Heinlein originally taught us, pay it forward.

Onward to lunch - or in my case, brunch. And COFFEE!

Today is my dad's seventh yahrzeit, the anniversary of his death.

He died a week before turning 80, with his mind intact but his body failing in so many ways. Dad said he wasn't dying but I didn't believe him. He certainly didn't want to live the way he was living, and so he did the only thing he could - he stopped eating. He wouldn't talk about any of it with anyone. Not his wife of so many years, not his daughters, and we think not even his therapists (or at least they never told us).

What did I learn? That it doesn't help to not talk about your personal issues, because we can't help if we don't know what's really going on.

And that no one should die alone and uncomforted in the middle of the night, because they didn't believe in their own mortality.

Email ThisBlogThis!Share to TwitterShare to FacebookShare to Pinterest
Labels: yahrzeit

After the third of three doses of Abraxane (one cycle) on Monday, the port removal site hurt very seriously and so did my throat. Maybe a six on my personal one to ten scale?

Enough so that I hardly slept that night, even after taking three hydrocodone tabs. I thought maybe Rik had shared a cold with me since my throat felt scratchy. On Tuesday I waited for my afternoon appointments to get Neulasta and to see the wound care nurse. By then it still hurt a lot and with the nurse poking around it hurt even more. I took more hydrocodone after she finished, she called Dr G, and I went to see him.

Dr G ordered an xray to be sure the PICC line was still good, which evidently it is. He decided that all the sore skin, even in my throat, was due to Abraxane. It might be that I've finally had my personal maximum of taxanes. However, he was very excited about news from the American Society of Clinical Oncologists' conference and has a clinical trial in mind for me regarding microsatellite instability and doing a different genetic testing of my cancer. (There will be an article in the New England Journal of Medicine on this but he read an early online version on Monday. ASCO is amazing, Dr G is amazing, and I have no idea how he remembers it all. He didn't even know he would see me on Tuesday!) We also briefly discussed androgen receptor testing.

We've talked about Keytruda and Opdivo, the new drugs given to melanoma and colorectal patients with amazing success. They're related to treating microsatellite instability. It's a whole new world of medicine out there again!

In the meantime I put on a fentanyl patch for the pain, swished some GelClair and tried to gargle to reach the pain in the back of my throat. I didn't ask permission but did 'fess up to The Amazing & Wonderful Nurse Jacque. She can confer with Dr G and tell me to back off but it did hurt SO MUCH and now I feel better.

As Dr G has said from the beginning of our relationship, if I can hold on long enough there will always be something new coming down the road. Luckily for me, my indolent (i.e. lazy, slow-growing) cancer has given me almost thirteen years of life with metastatic disease.
Posted by Jill at 8:00 AM 4 comments: