I got this email today:

Hi Jill,
Congratulations – Your blog, Jill's Cancer Journey has been nominated in Healthline 2015 Best Blog Contest! You can see the contest here: http://www.healthline.com/health/best-health-blogs-contest

Each year, we recognize and honor the top health blogs of the year with our annual Best Health Blogs Contest. The contest shines light on those blogs that have really made an impact on their reader community and provided them with valuable information and resources to help them live better, healthier lives. We are happy to let you know that you have been nominated in the contest!

The contest started this Monday, December 21st and will run through January 21st. We will award cash prizes (up to $1000!) for the top 3 blogs with the most votes.

Please share the page with your followers and ask them to vote for you. Users can vote once every 24 hours, so please continue to share and encourage your followers to vote!

You can create a badge for you site that recognizes your nomination and encourages those to vote for you here: http://www.healthline.com/health/contest-badges
I’ll be happy to answer any questions you may have!

Last week my friend J died after only a few days with hospice care. I saw her on Thursday at our support group and days later she died. On Sunday Rik and I attended her memorial service. And tonight I went with friends to a shiva minyan at her home. The mourners? Her wife, her college-aged daughter, her sister and other family members.

Joanie, like me, had lived with metastatic breast cancer for more than a few years. We shared many struggles and difficulties, but I think we both approached living with advanced cancer in similar ways.

Other times it's just life. Or as our friend D from group puts it, the glass is full.

No, my nickname isn't Pollyanna. My life isn't all smiles and good cheer. It's just that I'd rather find the joy in each day if I can.

Even when I was hospitalized recently and shaking with fever and chills, after the shaking stopped, I tried to relax and practice my yoga breathing. The next day, if I could eat, I wanted some vitamin CH (that's chocolate to the rest of you).

I don't know how, even in this aftermath of yet another friend's death from advanced cancer, I can still smile. But somehow I manage to find joy in every day.

You might find this article from CURE Magazine of note: Hope in the Face of Death: Living With Metastatic Breast Cancer. The author notes that there are long-term outliers living with mets, naming me and others among them.

Every click on the article results in a donation to METAvivor. And if we don't give now to fund research into metastatic breast cancer, then when?

The Martian (movie) and cancer

My brilliant oncologist, Dr Sheldon Goldberg, writes several blogs on top of treating patients, staying current with cancer research, reading more than 100 RSS feeds daily, studying Jewish texts and raising a family. His brain must be bigger than most people's, and he can store and access so much information.

Recently he saw the film "The Martian," in which one astronaut is accidentally abandoned on Mars after his colleagues believe he died in a storm. It was a great book and a good movie. Dr G blogged about it here and asked me to share his comments on my blog. His take on the film was wholly different from what I expected, and yet it makes perfect sense to me as a cancer patient.


The Martian: How much is a person worth?

Recently, I saw The Martian, a movie about a man accidentally abandoned on Mars. The movie is about the struggle for survival, the marshaling of forces to allow the survival of that one man, the sacrifice of compatriots and the politics of rescue.

Cancer patients, and the people who care for them, can feel like they are abandoned on Mars. The feelings elicited by this movie are similar to those we, who care for cancer patient patients feel. When do we call the situation hopeless? When do we give up? How much can we put into the effort for one patient? How much can we spend?
In the movie there is no limit. Billions of dollars are spent, scores of people work without rest, people give up years, in the prime of their lives, to attempt to rescue a single man. In our real, medical world the money, the time, the energy are all limited, The resources are shared by thousands of patients. This places every part of the medical system in the position of distributing a limited, precious resource. The doctor must balance the chance of benefiting the patient against the cost to the system, which could mean denying another patient an equal or better chance. Doctors differ in their approach to this problem.

How can we do any less than our best? Our efforts are not like those in the movie. They are not as good as they should be.. The basis for saving the Martian was adoption of a nonstandard strategy, a strategy that would work, in theory, but was not a usual approach. A methodology that involved unanticipated expense and sacrifice.
Currently, the pressure to follow standard procedures is almost overwhelming. Deviation from such standards risks the label of malpractice. Obtaining insurance coverage for a treatment that is not recommended in guidelines, or for a problem that deviates from the FDA approval parameters is a Herculean task - and getting harder. .

Knowledge and Resources are always limited. The Martian was rescued, he beat the odds. It is very expensive and difficult to take on the odds... sometimes it works.

A Story Half Told: Life with Metastatic Cancer

If you have metastatic cancer, or you care for someone who does, you're free on Sunday and you live in the greater Seattle area, please join us at Greetings Gilda's Club Seattle.

When: Sunday, December 13 2-3:30PM
Where: Gilda's Club Seattle 1400 Broadway Seattle, WA
Please RSVP by emailing info@gildasclubseattle.org or calling 206-709-1400.
For more information, see attached flyer. We hope to see you there! 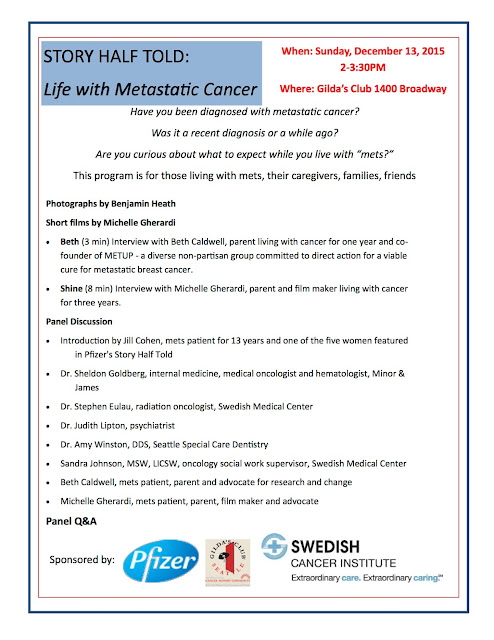 Last night our holiday of Chanukah began. It's about "this" important in terms of Jewish observance. Because it's a winter festival of lights and can fall very close to Christmas, the holiday observed by our government and so many people worldwide, Chanukah has come to take on increased importance in the USA and other Western countries.

That said, how can you not love a holiday whose main observance, after lighting candles (which we do on most Jewish holidays), is cooking and eating foods fried in oil? Me -- I never met a fried potato I didn't like.

Last night I did my usual, annual routine. I made my dad's recipe for latkes (potato pancakes) while listening to Debbie Friedman's album Not by Might, Not by Power, singing as loudly as possible and dancing around the kitchen.

While the latkes were cooking in batches, I made the Joy of Cooking's vegan orange cake, which comes together quickly, bakes in 30 minutes, and doesn't require more eggs or even much oil. I use half the sugar called for and cut the orange juice with half lemon juice, so that it's not as sweet as the original recipe.  I spread chocolate chips over half the top as the cake cooled so Rik and I would both enjoy part of it.

I pulled from the fridge the rest of the cranberry chutney I made for Thanksgiving, some salad, apple sauce and Greek yogurt (didn't have sour cream). After frying so many latkes that the house stank from oil, we ate latkes and salad for dinner until we were stuffed. Rik ate six and I ate four. Shouldn't have had that last one (urp).

Now that's what I call a holiday!


Again I will post my adaptation of my father's latke recipe. As my mom and I recalled, Dad would stand at the stove frying while we three sat at the kitchen table. He'd serve up a plate of latkes, start frying another batch, and eat his while standing up. No wonder both his daughters became master latke-makers!

1. Grate the potatoes by hand using the tiny holes in the grater. Or in a food processor use the thinnest grating blade, then whirl with the S blade to turn potatoes from grated strips into more of a mush. Grate the onions in the same way. Scoop up 1/4 cup of potatoes at a time with your hands and squeeze out and discard the excess liquid, then put in a colander and add the onions, eggs, matzo meal or flour, salt, and pepper, making sure that everything is very well blended. Let batter drain in the large colander over a mixing bowl while you fry.

2. Heat about 1/4 inch of oil in a 10-inch pan over high heat. Scoop latkes using a tablespoon and add them to the hot oil. Don't crowd the pan -- four at a time is plenty. Be careful not to burn yourself! Cook latkes for about 5 minutes per side. Drain on a rack placed in a baking sheet with one inch sides (do not use paper towels), and keep warm in a 250 degree oven. Or eat standing up, while they're fresh from the oil.

3. Serve with applesauce at a meat meal or with sour cream or Greek style yogurt at a dairy meal.

PS You can freeze fried latkes in a single layer on a baking sheet. Transfer to a freezer bag or other container. When ready to eat latkes again, reheat in a low oven for about 20 minutes or until warm. If you make them in advance this way, your house doesn't smell like fried potatoes or stale oil when the guests arrive. Thanks to my sister for this great tip!
Posted by Jill at 3:54 PM 1 comment: