I've posted before about ONJ (osteonecrosis of the jaw), a rotten side effect of taking too many bisphosphonates to strengthen my bones over the years, or in my case, too much Xgeva.

For the past ten days I've experienced annoying pain in my ONJ spot of exposed bone on the roof of my mouth. I saw the dentist, and she wasn't sure what might cause that pain. She doesn't think I need another root canal. The ONJ spot hasn't changed in appearance. So Dr Amy spoke to Dr G and together they decided I should have a CT of my mandible (jaw).

I had the CT and it revealed -- NOTHING. No tumor, no new ONJ, no nothing. But I still have the pain. I changed pain meds from Vicodin to fentanyl patches left from earlier this year. The fentanyl made me woozy and high at first; I didn't really sleep last night. But today I'm not woozy and the pain is gone. I see Dr Amy again next week.

I hate to judge myself on what to take, but since I have the fentanyl on hand and Dr G had prescribed it, I'll take it. And it works!

...you'll know why I couldn't resist sharing this comic strip.

Nick Mulcahy
July 15, 2015
The pink culture of breast cancer is about to get an infusion of red hot.
A small but growing group of women with metastatic breast cancer and their supporters have formed MET UP, an activist group modelled on the confrontational AIDS Coalition to Unleash Power (ACT UP) and sharing the same inspiration of anger, rebellion, and fellowship/sisterhood.
"MET UP is…committed to direct action for a viable cure for breast cancer. We protest and demonstrate," reads a portion of the group's mission statement, which was recently posted online.
A changing of the guard — and of attitude and tone — is needed in advocacy, suggests the group. "The time for honey is over. Break out the vinegar. It's our turn now," the group states.
MET UP has its eye on some major powers-that-be: the federal government, Komen for the Cure, and sexploitative breast-related charities, said founding member Beth Caldwell, 38, of Seattle, Washington, a married mother of two small children whose initial breast cancer diagnosis was metastatic disease.
"We're very much in our infancy, but we have big plans," she told Medscape Medical News.
One of the roots of the rebellion is frustration over the fact that, despite 40 years of "breast cancer awareness," the average survival with metastatic breast cancer has not changed and remains 3 years. "We're not making any progress in keeping people alive," said Caldwell.
"There are many members of our group who are very angry at Komen," she continued, referring to the influential and controversial breast cancer organization.
Here's one of the reasons for the rage, said Caldwell: In 2013, Komen had $125 million in revenue but gave away only $38 million in grants (and even then, some grants were not for scientific research). "As an organization that pitches itself as 'for the cure,' they are not doing enough to actually seek the cure," she summarized.
Komen has also reportedly kept women with metastatic disease off the podiums of its rallies because the specter of death is an emotional downer, as highlighted by Medscape Medical News.
"We are excluded from the club," says Caldwell about the general aversion that pink culture — with its mantra of "beating" breast cancer — has for the people who are inexorably destined to die of the disease.
So, is MET UP — à la ACT UP — planning to storm Komen headquarters in Dallas? Not now, said Caldwell, but "Komen is definitely on our radar." The activists recognize the group has new leadership and they are waiting to see whether grant funding priorities change.
The first major direct action planned by the fledging organization is a nonviolent "die-in" on October 13, which is Metastatic Breast Cancer Awareness Day, in Washington, DC, on the lawn of the US Capitol with 1430 men and women to symbolize the daily death toll of the disease worldwide.
Posted by Jill at 12:20 PM 4 comments: Links to this post

I saw Dr G yesterday and we discussed a number of things.

My pneumonia is resolving. Yay! Evidently the pneumonia vaccine I received in 2013 didn't cover this strain, but it's too soon for me to receive another vaccine.

He had my tumor tested for the androgen receptor and the result came back positive. He'll contact Dr Julie Gralow, a local, renowned breast cancer expert, to review the result with her, and if she approves, I'll start bicalutamide (Casodex). Although this drug is usually given to men with prostate cancer, it might be effective for me.

Dr G also had my tumor tested for micro satellite instability. The results showed the tumor is stable, which you would think would be the "right" response. But this means the newest therapies might not work for me and I would not be eligible for such clinical trials. It might be worthwhile to re-test my tumor for ER/PR status. If it's changed to triple negative, which isn't too likely in my opinion, it might change my eligibility for said trials.

If Dr Gralow does not recommend bicalutamide, I will start Taxol in a little over two weeks (or, as Dr G puts it, after Tisha b'Av). I wouldn't say he's exactly superstitious, but it makes a certain kind of sense not to start new chemo during the lead up to a major Jewish fast day.
Posted by Jill at 3:46 PM 2 comments: Links to this post

When cancer organizations get it totally wrong

It's worth reading about how Young Survival Coalition, Stupid Cancer and Fuck Cancer missed the message in their corporate partnership with Spencer.

UPDATE July 10: YSC has taken down the Facebook post about this campaign, but Spencer Gifts is still listed as a sponsor on the YSC website. I haven’t received a response from them to this post yet.
Dear YSC:
I’m an under-40 woman living with metastatic breast cancer. I’m your demographic, the one your programs are designed to help. And you HAVE helped me–I even go to a support group for young metsters organized by a YSC volunteer. Which is why I think I’m the most disappointed in you, even more so than Stupid Cancer or F*ck Cancer, for being involved in this.

See what it says at the top of this? That’s right, it says “Boobies make me smile.” And of course it says it twice, because we all have two boobies. I see what you did there! Hahaha, how clever!
Oh wait, no it’s not. It’s actually horribly offensive.
I don’t have two boobies. I only have one. They cut off the other one because it had an enormous tumor in it. And the most horrible part of that is, I’m STILL going to die of metastatic breast cancer.
There have been plenty of studies done about how the sexualization of breast cancer hurts breast cancer patients. First off, supposedly funny and edgy slogans like “save the tatas” and “boobies make me smile” trivialize a disease that kills 522,000 women and men worldwide every single year. The death toll in the US has been 40,000 per year for decades. How is the thing that kills those women supposed to be funny? How are those of us who will die of this disease supposed to feel about this joke?
Secondly, focusing on our disease originating in our breasts, rather than seeing us as whole people, dehumanizes us. And it makes women feel that if they have a mastectomy, they’re no longer worthwhile, or feminine, or real women. When I lost my breast, it almost broke me emotionally. Almost. This sort of campaign brings me right back to that feeling, and it does the same for many other women who have had their breasts amputated in a desperate attempt to save our lives–because our lives are what matter, not our breasts.
Campaigns like this do real damage to breast cancer patients. And I know that you know this, because right next to where this image appears on the YSC Facebook page, you’ve got a video about how breast cancer surgery impacts women’s feelings of self-worth.
I expect this kind of insensitivity from a porn industry executive trying to get some cheap publicity. But not from you, YSC. I expect you not to make women who have had a body part amputated feel worse about themselves. I expect you to know that this type of campaign is absolutely the worst kind of cause marketing. And yet, there is your logo at the bottom of the poster, and there’s this image proudly displayed on your Facebook page.
Speaking of your Facebook page, several of us pointed all of this out to you in comments on that photo there. Let me quote your complete non-apology here:
“We apologize if this post was offensive. We would like to clarify that the “Boobies Make Me Smile” slogan is not a YSC slogan, it is the name of Spencer’s Foundation. Our bracelet is called “Survivor Strength.” We partner with Spencer’s to promote breast health education among their young consumers and over the last 8 years have reached countless young women to empower them to be their own best health advocate. It is always our goal to inform and empower young women with breast cancer, and we’re sincerely sorry if this post was insensitive.”
If?!?! If this post was insensitive? If this post was offensive? It’s your goal to empower young women with breast cancer, while you trivialize their disease and marginalize those of us who have lost a body part to it? Really? And how is the fact that Spencer’s foundation is called “Boobies Make Me Smile” a reason not to be offended? You’re telling me that you actually decided to partner with an organization called “Boobies Make Me Smile?” Are you kidding me?
I know you need money to support the important programs you run. We all understand that. But you undercut the power of those programs and the support you give to young women with breast cancer when you turn around and partner with an organization whose very name is offensive. How can we take you seriously after this? How can we believe that you really have our backs, when you turn around and throw us under the bus to make a quick buck?
I beg you, before further damage is done, to withdraw from your partnership with Spencer Gifts and give them their dirty money back. If you don’t, I know an awful lot of young women who will no longer be able to support you in good conscience, myself included.
Sincerely,
Beth Caldwell
Also picked up by huffington post.
Posted by Jill at 11:57 AM 3 comments: Links to this post 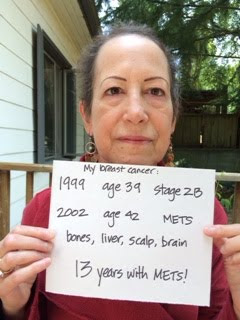 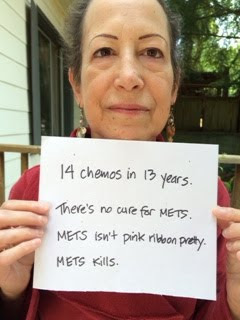 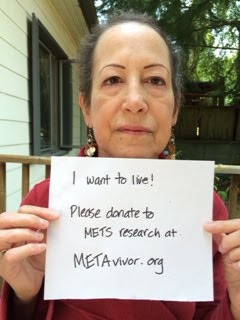 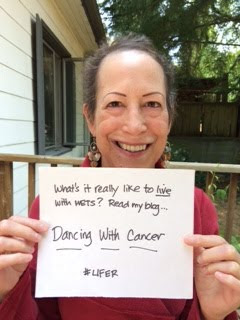 Rik and I saw Dr G last week. He wants to retest my lungs with another CT to make sure my pneumonia has ended. Also I think he wants to me take a blood test for pneumonia markers. We even talked about the possibility of the pneumonia vaccine to prevent another month like this.

As far as treatment goes, we have several options --


He wants to incorporate neuroprotective medicines. I'm not sure which meds he means, but the idea is to prevent further neuropathy in my feet and hands. 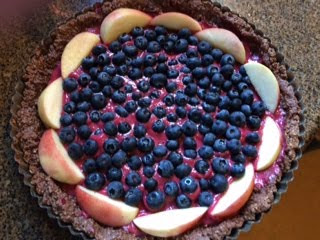 Raspberry curd filling made with our own berries, local blueberries and white nectarines.
Posted by Jill at 6:02 PM 2 comments: Links to this post